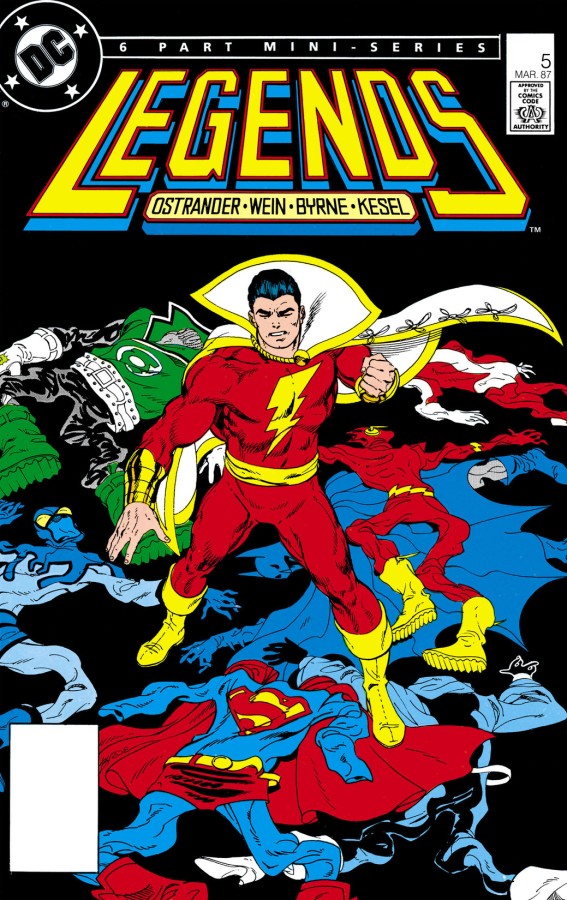 Welcome, welcome, to the penultimate edition of our stroll down memory lane. We’re into month five of Legends. Things get serious! More tie-ins! And a rather boring event starts pushing us towards some great new beginnings.

It’s only getting worse for the Justice League.

The Martian Manhunter faces off against the android that spared Gypsy. The android’s rationale is that Gypsy has never done anything to harm Ivo, but the same can’t be said for J’onn (it can, actually, but it’s an irrational android). I don’t think the android would have had a chance under normal circumstances, but J’onn is still pretty angry about the whole “an android just like this one killed Vibe” thing, so it’s a short battle.

Afterwards, J’onn tells Gypsy that she needs to stay with her family instead of rejoining the Justice League, if it ever gets back together again.

Meanwhile, Steel has decided to take action. Vixen tries to talk him out of it, but he’s pissed off and a cyborg and she just has animal powers. Steel suits up and walks down the street, which is a no-no these days thanks to the movie Gipper and G. Gordon Godfrey. The police arrive to arrest him and he tells them to leave him alone…until he notices that one of the cops is another of Ivo’s androids.

Of course, the ensuing battle makes it look like Steel is another crazy superhero attacking a honest cop, but towards the end the android reveals his true colors, by which I mean his red glowing eyes. And by “the end,” I mean the death of Steel.

The Martian Manhunter arrives just in time to fly Steel to his grandfather’s lab, which is where Steel was transformed into the cyborg he is now. Steel’s grandfather makes the inevitable decision to unplug his grandson. Steel is dead.

There’s only one issue left in this series. Will Steel be the last Leaguer to die?

This is another comic that is only vaguely connected to the main series and only because the Blue Beetle, being a superhero, is now an outlaw.

Last week, I mentioned that I loved Blue Beetle #9 because of how old school and joyful it was. I stand by that claim. While there’s really only one subplot in this issue, it’s an entirely new one, and we don’t touch base with the ones that were introduced last issue! I mean, come on, who does that anymore? These days comics live issue to issue with no guarantee they’ll be back in thirty days. And yet here’s Len Wein just throwing subplots around like Blue Beetle is going to last forever which, incidentally, it doesn’t.

I also mentioned last time that Dell Barras has a heavy hand when it comes to inks and you don’t need to look any further than issue to see that I’m right. This issue is penciled by Chuck Patton, but it’s very similar looking to Paris Cullins’ art from last issue. Don’t get me wrong, I really like what Barras does, but, not unlike Tom Palmer, his inks tend bury the finer points of whoever the penciler is.

My love for this Blue Beetle series only continues to grow.

To be fair, this is an average comic, not a bad one, it just seems worse than it is because it makes no sense as a part of this event. I realize the goal was to get Warlord involved in some mainstream DC action so that people might read his book, but throwing DeSaad in here to…what, exactly? Because Darkseid wants to throw the Earth into chaos and can only truly do so if he includes the world inside the Earth, too? Because in the main series, we’ve only see Darkseid’s plan work in America. Maybe taking on the other countries on the surface first might have been a good idea.

There’s a Warlord doppelganger and some confusion and action and it looks nice, but it doesn’t do anything to sell me on this series.

Clark Kent is on the run.

Darkseid has sent his Omega Beams after Superman and, unbeknownst to Darkseid, that means they’re after Clark Kent. They eventually catch up to Superman’s alter ego (because there would be no story if they didn’t) and Kent materializes on Apocalypse, in front of Darkseid. The suspension of disbelief is strained a bit here because Darkseid wonders why his beams transported this lowly human reporter and not Superman. Seriously, Darkseid? You didn’t think that maybe, just maybe, this might be Superman in disguise? Are your beams just that unreliable?

Since Kent is useless to Darkseid, he is tossed aside in a way that would kill any normal human. But, you know, this is Superman.

From there it’s Superman’s adventures on Apocalypse, which come to an abrupt end when he faces glommer, which takes control of Superman and send him into one of the fire-pits. And that’s that for Superman.

Superman is pulled from the fire-pits by one of the denizens of Apocalypse, who thinks he can trade a fire proof man in for something good. But Amazing Grace, the leader of the resistance, decides that Superman is their savior, and will help them overthrow Darkseid.

But Grace isn’t what she claims. She’s actually working for Darkseid, trying to root out the rebel forces. She also happens to be the sister of a certain G. Gordon Godfrey.

Grace uses her mental powers to convince Superman to lead the rebellion which is, of course, crushed by Darkseid’s forces, just as Grace and Darkseid planned. The ultimate goal here was to corrupt Superman, turning him into one of Darkseid’s followers. It worked.

Superman, calling himself The Savior, is now one of Darkseid’s Elite, convinced that he is the son of Darkseid. Fortunately, New Gods Orion and Lightray are en route to Apocalypse to save the man of steel.

Orion fights Superman, eventually breaking Darkseid’s spell by showing Supes that he is the son of Darkseid. Orion uses a Motherbox to give Superman his memories back.

Lightray, meanwhile, flies over Apocalypse and surveys the battleground. Superman’s time on Apocalypse has led to a lot of death and destruction. Amazing Grace tries to take control of Lightray, but he resists and blasts her with, well, light. Lightray isn’t lame like Superman, people! He can’t be mind controlled!

Short story shorter, Darkseid sends Superman back to Earth before Superman can really get any justice for what’s been done to him. Orion and Lightray make an ominous threat towards Darkseid before heading back to New Genesis. Lightray asks Orion if he returned ALL of Superman’s memories to him and Orion says no, that he withheld the memories of what Superman did as The Savior, saving him from the knowledge that he was responsible for hundreds of deaths.

That last point may seem odd, but sure enough, there’s a Jim Shooter stand in named Sunspot in this issue. He fights Guy Gardner. He rants like an ego maniac. He talks about being able to create a “new universe.”

To my knowledge, John Ostrander wasn’t at Marvel when Shooter came in and whipped the place into shape, but I believe Len Wein was and he scripted this. So I’m thinking that this plot point (from Ostrander) was modified by Wein. Regardless, it’s an interesting bit of comic book history.

Billy Batson putting his big kid pants on and becoming Captain Marvel again is important because it’s showing us that good has begun to triumph over evil. Marvel is also one of the superheroes called upon by Dr. Fate to fight G. Gordon Godfrey. His other choices (who we see for at least a page each) are Black Canary, Guy Gardner, Blue Beetle, Batman, Flash, Changeling, and Superman. Why this group? I’m not sure. I suppose you could make the case that DC was trying to pull in as many different elements as possible, from the Marvel Family to the Charlton heroes while still including as many of the Five Families as possible: Green Lantern, Flash, Batman, and Superman. What was clearly not their goal, however, was diversity, as aside from being very white, this group only features one woman.

All of this sets up our final issue and the big showdown between Earth’s heroes and Darkseid’s forces.

This entire series could have been half as long, if that. This is the final issue, yet there’s nothing climatic about it. Cosmic Boy and Night Girl have been whisked away to the end of time to face the Time Trapper, who runs them through the various bad guy paces before they eventually go back to their on time and the Legion of Superheroes. The Time Trapper says some mysterious things, but nothing that would give you any indication that a heavy duty story is coming. No, that doesn’t happen until the very last page, and even then there’s not much to go on.

So, to recap this four issue series: Cos and Night Girl go back in time and discover that history is different than what they know. They try to go back to the future. They eventually make it to the end of time and the Time Trapper. He mocks them. They go back home. The last page features a theoretical cliffhanger.