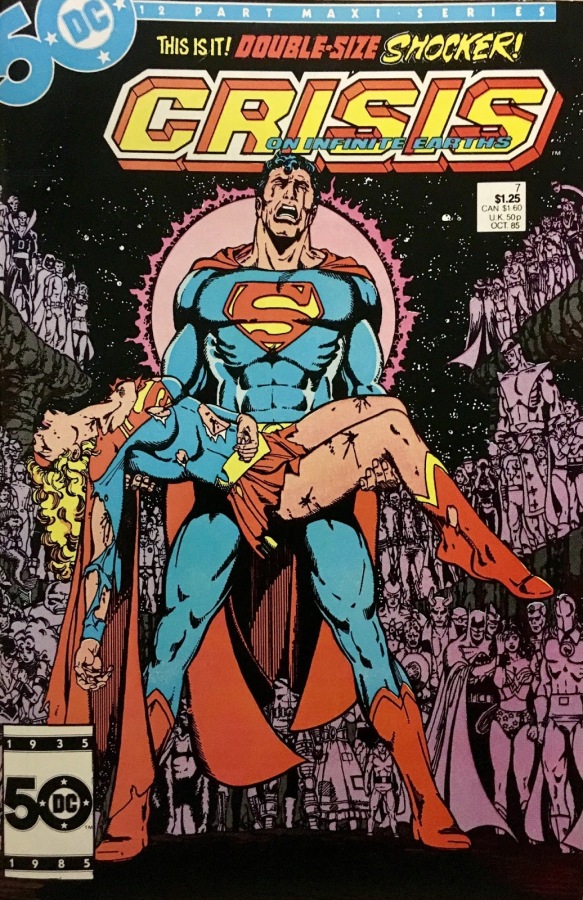 This is one of the big ones. This is where things get real. But let’s start small.

It’s cyclical, I suppose, although the evolution in the past few decades has been fewer words on the page, not more. But more captions and longer speeches appear to be back, more so at DC than Marvel (in part due to the rise of Scott Snyder and company).

It’s not necessarily bad and it’s definitely a throwback.

It’s funny because I find the purple prose in much of Miracle Man to be too much for me.  I actually like a lot of what Gaiman did on that book better because of it.  Let’s not forget that Crisis came out when the X-Men by Chris Claremont were a big deal, and that man wrote like he was getting paid by the word.

This was the style the style in the first half of the 80s.

The problem, of course, is that the long winded prose in Crisis #7 is coupled with 10 pages of exposition before we ever get to the emotional crux of the story.  Even reading it years ago, I remember that being a huge narrative misstep in my eyes.  This issue was supposed to be the big one and it just takes forever to actually get going.  Did it still resonate with me?  Sure.  But I feel like it could have had so much more of an impact if I hadn’t been beaten down by “the Secret History of the DCU” for a third of the issue.

Now for the big event, which is spoiled by the cover. On one hand, it seems a shame to advertise such a poignant, dramatic moment before anyone reads the comic. On the other hand, comics back in the day often had salacious covers that didn’t actually come to pass.

In the long run, I suppose it’s Barry Allen’s death that ended up being the bigger deal, given that some version of Kara (multiple, in fact) would return to the DC universe relatively soon after Crisis. It wasn’t the same Kara, though, so I can understand how that didn’t make anyone feel better.

Barry’s death probably had more of an impact, all things considered, although he would (unfortunately) return, too.K

Credit to Wolfman and Perez for realizing that Supergirl (and Barry Allen) had to die well in advance of the conclusion of the series.  We needed to be able to see the reactions from the other characters to really feel the weight of her death.  Had Supergirl died in #12, we never would have gotten any of that.  Her death would have been irrelevant, really, as she was erased from existence, anyway.

The only down side to that is that part of me wishes Crisis didn’t end the way it does.  Imagine if we didn’t get the reboots.  Imagine a Superman who was now dealing with the death of his cousin.  They keep trying to get Superman to be more human — that would have done the trick.

It took a while for DC to start cashing in on the “Crisis” brand, but in month #7, they started increasing the number of books with the “Crisis” banner, even though most were only vaguely connected to the main series.

A pattern would form for most of these tie-in books, one which only really served to steal pages away from creators.  It wasn’t as bad for this issue of All-Star Squadron because it was an over-sized anniversary issue.  Still, the pages devoted to Harbinger recruiting Firebrand — a retelling of a scene we saw six months ago in Crisis #1 — are a waste.  We don’t learn anything knew, even if the scene is placed into greater context.

We also see Phantom Lady and Plastic Man pulled away by the Freedom Fighters, a way of kind of re-establishing them as members of that team before the DCU is reset.

It’s also interesting to note that we don’t see Superman or Batman at all, but we do see Wonder Woman.  Crisis would merge worlds and keep the JSA/All-Star Squadron, but it would mean removing the Trinity from their ranks.

Roy Thomas wrote this, with pencils by Mike Clark and Arvell Jones, and inks by the infamous Vince Colleta and Tony DeZuniga.  So, you know, who actually penciled it ended up being somewhat irrelevant.

This is a goofy ass comic with some red skies.  It was by Cohn, Mishkin, Kupperberg, and Farmer.

Aside from the “hey, look at this scene that you already saw in Crisis” pattern that held across many of the tie-ins, we also got another one: “for the last time.”

This issue features a team-up of Superman and Supergirl and has very little to do with Crisis, aside from the aforementioned redundant scene, this one being between Supergirl and Batgirl.  No, this story was specifically created to give these two heroes one last adventure together before the events of Crisis #7.

It’s a perfectly fine comic, although Supergirls’s “ominous feeling” (which the editors’ box at the end of the issue goes so far as to call her “morbid feeling,” which is really subtle) is a bit on the nose.

This issue was written by Paul Kupperberg with some really nice art by Rick Hoberg and Dave Hunt.

This is such a clusterfuck of a comic, and I don’t just mean this issue.  I’m not sure why it’s as bad as it is.  Roy Thomas has actually written some great superhero stories in his day, but Infinity, Inc. felt like your dad trying to get into the music you listened to.  It felt like he was trying really hard to write a cool comic about some cool young kids and it came off worse than Bob Haney’s Teen Titans’ dialog.

This is another “red sky” tie-in, meaning the red sky is the only thing that connects this story to Crisis.  It mainly features Infinity, Inc. fighting the Justice League (Detroit).

Todd McFarlane draws this issue, and although it’s still a long ways away from his eventual style, it’s much closer than the previous issues he did of this series, mainly due to the inks by Steve Montana.  Up until this point, McFarlane had been inked by some heavy handed artists, but Montana let McFarlane’s pencils speak for themselves, even if they were sometimes bizarre.

You would think that, since New Teen Titans is written by the guy writing Crisis, this tie-in issue would offer something a bit more substantial.  You would be wrong to think that.  This is, yet again, another issue giving us different versions of the same events.  We see Cyborg being recruited by Harbinger and we see the first big battle the Titans are engaged in.  It’s all stuff we saw over the course of the first half of Crisis.

The Crisis tie-ins appear to decide upon a timeline of events based upon the whims of their creators.  Most of these issues feature events that took place at the beginning of Crisis.  DC Presents leads into issue #7.  But Omega Men #31 actually leads into the events of Crisis #8, the first time a tie-in has lead us to an issue that had yet to be released.

We get an explanation (of sorts) as to how half of the Omega Men end up in Crisis.  It’s more wasted space, though, as attempting to explain why any of these characters end up involving in Crisis is pointless, as it would take forever.

Letterer Todd Klein pulls double duty on this issue adding writer to his credits.  Shawn McManus draws the main story and it looks great.  Ernie Colon and Bill Collins handle the art on the middle section that covers the half of the team headed to Crisis.  It’s really nice, too.

We don’t just get red skies, we also get shadow creatures!  And they’re fighting the Amazons!  Wonder Woman blows her secret ID to rush to the aid of her sisters and the gods of Olympus get involved in Crisis.  Of all of this months tie-ins, this one has the most actual Crisis story to it.

This issue isn’t really important as a tie-in, but as the penultimate issue of Wonder Woman’s first series.  Rebooting Wonder Woman was a big part of the reason for Crisis, so the cancellation of her title was a big deal.

Writer Mindy Newell sends WW on her way, with art by Don Heck on one portion of the book and Pablo Marcos, doing his best Don Heck, on the other.  It looks exactly like what you would expect a Don Heck comic to look like.

In the end, none of these tie-in comics are essential.  Most of them are basically just money grabs, although it was nice to see Wonder Woman fight the shadow creatures.  In the end, the three books that would change the most — Wonder Woman, All-Star Squadron, and Infinity, Inc., were probably the only ones worth reading, and even that is a bit of a stretch.

Next: The number of tie-ins continues to grow as we hit the final third of Crisis!