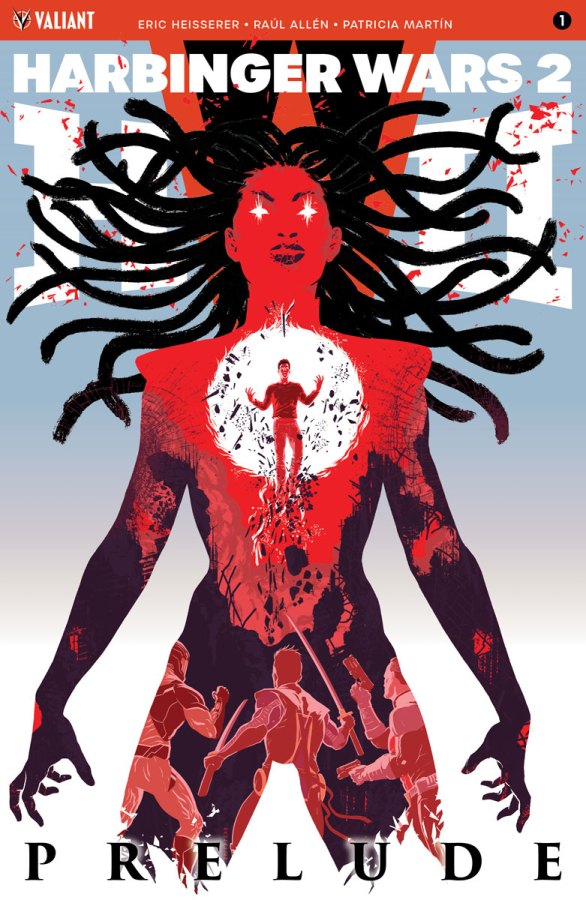 I don’t know what Harbinger Wars 2 is going to be like, but the prelude issue was great.

Raul Allen is one of Valiant’s secret weapons (no pun intended). His work is fantastic. He falls into the school of using a lot of varied sized panels as the norm for each page, ala ACO, Marco Rudy, or David Aja. It’s a storytelling technique that I really love, although I can see how more traditional fans might be put off by it.

This doesn’t stop Allen’s art from having range, though. There’s energy to his action sequences, perhaps more so given how detailed his set pieces are. There’s also bursts of emotion, like when Livewire is able to get free and figure out what’s going on. He big counter strike has real impact, both emotionally and intellectually. She has saved Psiots by ostensibly launching the first attack in a coming war, even if that wasn’t her intent.

The character work here is also excellent. Secret Weapons is one of the few Valiant books that I’m behind on (note: Bloodshot is one of the best comics being published) so I don’t know who these people are, but you don’t need any prior knowledge to enjoy this book. Each of the characters has a distinct look and while we don’t get a lot of time to learn about them, their speech patterns and appearance gives us some hints as to their personalities.

The story is solid and straight forward, built to carry you to Livewire’s big moment. She seems to be much stronger than I remember her being during her Unity days. Her powers are intriguing and Allen does a great job of making them visually interesting.

Speaking of which, I’m glad Valiant is using this series as a way of showcasing Livewire. She is easily the most interesting of the new characters they’ve introduced since launching. I realize that she doesn’t have the brand recognition of XO, Ninja-K, or Bloodshot, but neither did Faith, and she got her own books. Let’s hope we get a Livewire title out of this.

All in all this is a great start to Valiant’s next big event. I hope the series can live up to this.

One thought on “Harbinger Wars 2: Prelude #1 Review – A Great Start to Valiant’s Next Event”