May 7, 2018October 9, 2021 Author by kylegarretPosted in Indie Superheroes

Acclaim Comics/Valiant Heroes happened at the perfect time for me.

I think I was reading two books from Marvel, Thunderbolts and Untold Tales of Spider-man. And I think I’d jumped ship on the Superman books, but was still holding on to the Legion of Superheroes and Legionnaires. So my Big Two spending was at a low point. Image had yet to expand to become the well rounded publisher they are now, but I was reading Stormwatch, as Ellis was in the middle of his big revamp of that corner of the Wildstorm universe.

I was reading some indie books, as they are what brought me back to comics from my brief hiatus, but as far as superheroes went, I wasn’t reading much.

Plus, Fabian Nicieza was the EIC of Acclaim and he was one of my favorite writers. How could I not jump on board?

The Best of the Bunch

I was in college, so I couldn’t buy every title in the line like I wanted.

Obviously, books written by Nicieza were going to make the cut. That meant Troublemakers and the quarterly Turok books. And the Turok books were drawn by Rafael Kayanan? Sold and sold.

The Solar quarterly books were also an easy buy, given the first issue was written by Warren Ellis and drawn by Darick Robertson. I used a bit I learned in that first issue in an American Lit paper I wrote that quarter.

I was actually late to the Quantum and Woody party, but the house ads won me over and I tracked down the first few issues. I’ve been a zealot for the series ever since.

Trinity Angels was another no brainer. Maguire was one of my favorite artists.

Writing it out now, I realize that most of my purchases were titles that didn’t carry over from old Valiant. Even Turok and Solar were fairly drastic re-imaginings of those characters. But my main focus was on new books, like Troublemakers, Q&W, and Trinity Angels.

Valiant 2.0 never published more than 8 or 10 books a month, and if they were around now I’d probably be buying all of them, the way that I do with the current Valiant. I love lines of comics are contained to a relatively small number of titles and companies that seem content with that. 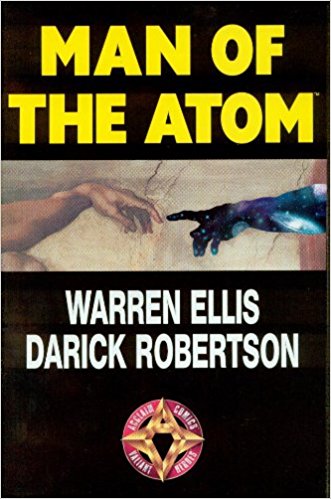 Besides the fact that I genuinely enjoyed a lot of their books, part of what made Acclaim/Valiant so appealing was that I was getting in on the ground floor. They accepted emailed letters for their letters pages! And I had some published! I felt a connection to the publisher and the content in a way I never did with Marvel and DC, because by the time I got around to reading comics, they were already giant businesses.

Acclaim’s books also spoke to my 90’s sensibilities in a way that the “extreme” comics coming out from other superhero publishers didn’t. Turok felt like a kid I could relate to and he also happened to be Native American. I’m as white as they come, but an actually non-white character being the focus of a title was a big deal, even in the supposedly progressive 90’s.

Shadowman was black! The main characters in the 2nd Solar series were lesbians! The Trinity Angels were women! Acclaim was certainly no Milestone, but they were far more diverse than Marvel or DC.

And Quantum and Woody addressed race head on. Turok didn’t shy away from it, either.

The books just felt like they were riding the better part of the 90s wave. While other books were roiding out, Acclaim’s books were more focused on good stories than flashy visuals.

But while its footing in the 90s made the Acclaim/Valiant books appealing, but was also ultimately its downfall. Launching a new line of superhero comics in 1996 was a horrible idea. The comic book industry was a disaster, and while some might think that meant that a new company could challenge Marvel and DC, what it really meant is that the medium was bleeding readers.

And the readers who stuck around couldn’t have cared less about Valiant, be it the old version or the new.

The Acclaim/Valiant line was so focused on telling good stories that it neglected to follow the trends of the day; there was no big crossover until the entire line was about to be canceled. Even in the late 90s, crossovers were king, yet Acclaim/Valiant decided to let their books grow on their own. And while I appreciate that sentiment, big, shiny events were what kept comics afloat.

Acclaim didn’t really indulge in the “extreme” comics of the period, either. You could probably make a case that Bloodshot fell into the big guns, big muscles group, but there wasn’t a lot of T&A. There wasn’t much in any of the books, really, even Trinity Angels.

But the 90s were hard enough even for the Big Two, let alone new companies trying to get into the superhero game. Eventually Acclaim cut back the line until it was mostly just comics that tied into Acclaim video games. They did attempt to keep Quantum and Woody going a few times, but it never really worked out.

Ultimately, Acclaim’s greatest claim to fame is that they were the middle step that would lead to the current Valiant Comics.

Next: The best of the best of Acclaim/Valiant 2.0.