My wife, who, as you no doubt know by now, works at Pixar, pointed me in the direction of this article on the “existential quandaries” caused by the world of the Cars movies. I told her that I thought the questions the writer offered up were really obvious and that my questions are much deeper.

So she basically told me to prove it (although, sad to say, she’s heard most of this before).

But first, let me address the weak sauce of that other article.

Okay, now that we’re done with that (I mean, come on, that’s just shite), let’s get down to the real brass tacks.

Full disclosure: I’ll be focusing on the first Cars movie, as it’s what started this all. Also, this quote from Grant Morrison should clarify my stance on a few things: 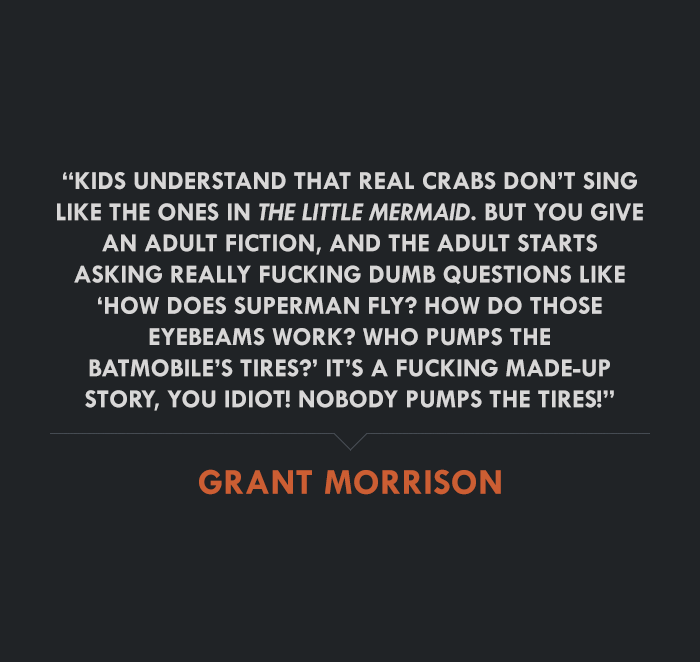 Questions about what the cars eat or how they reproduce feel so obvious and pedestrian to me and, besides, what difference does it make? Digging into it doesn’t really expand our thinking in any way, does it? I mean, unless car fetish becomes a thing.

Here’s something about the original Cars movie that I haven’t been able to figure out:

What is it saying about money?

The basic premise of the movie is that race car Lightning McQueen, who is self-centered and focused on winning the Piston Cup, mostly for the fame and fortune that will come with is, gets stuck in a small down in the desert that is on the verge of going under. The town was bypassed by a new highway, so there are no customers for the few remaining businesses.

Over the course of McQueen’s stay in Radiator Springs, he learns that there’s more to life than just wining the Piston Cup and being famous. He learns to think about others. He is even challenged: when was the last time you ever thought of anyone other than yourself?

So before leaving the town for his big race, McQueen helps his new friends out, but that involves spending money at their stores.

It should also be pointed out that during the entire movie most of them are regularly pitching their wares. Flo constantly suggests that everyone is thirty, thus needing to stop at her cafe. Her husband, Ramon, tells McQueen multiple times that he needs a new paint job. At one point, the town is lined up, watching McQueen fix the main road, and each of them delivers a line that has to do with their business. What they sell is what they are.

And so it makes sense that McQueen’s only avenue to help them is by buying their stuff.

In the end, McQueen sets up his new racing headquarters in Radiator Springs, revitalizing the town.

So is money good or bad? Is capitalism a problem or a solution?

The town is only dying because capitalism has decided that a faster route is needed through the desert, no doubt to transport goods across country. So capitalism decides that the town is an acceptable loss in the face of improved service and, in theory, more money.

And yet capitalism saves them. While McQueen turns down a big new sponsor to stick with the people who backed him when he was a nobody, it’s still his fame that brings Radiator Springs back to life. And its his money that wins over the people in that town, as he ultimately has little interaction with most of them beyond buying their stuff.

It would be entirely justified to suggest that I’m reading too much into Cars, but a) I’ve seen it like 200 times and b) the whole thing is about money. From McQueen’s desire for more, to the lack of it in the town, it is the oxygen that keeps everyone in this movie going.

I once referred to Cars as the “Bernie Sanders of Pixar movies” and I think that’s where I’ve landed with regards to the Cars philosophy on money. Capitalism is good when it’s balanced by a sense of community.

Which is great, except that the world is full of Chick Hicks.